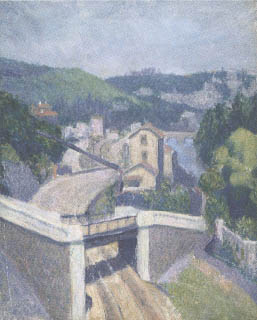 Europe '24 was an exhibition featuring artwork by Ben from his tour of Europe in 1924. This exhibition opened on Saturday, June 3rd and ran through August 13, 1995.

Europe '24 featured paintings and photographs by Ben, many of which had never been exhibited before, which recorded his trip through Europe in 1924. The exhibition began with examples of Ben’s work from his time at the Pennsylvania Academy of the Fine Arts, which he attended from 1919 to 1923. It continued through nearly thirty paintings from his European sojourn, and ended with a sampling of works he was inspired to create upon his return nearly six months later.

The paintings in the Second Studio were almost all works from Ben' stay in Europe in 1924. On his customs declaration when he returned to the United States, Ben listed 40 "sketches in oil." Of those 40 paintings, 27 had been reunited and were exhibited together for the first time. The works were, for the most part, small oils on boards, which provided easy transportation when Ben traveled from place to place. These works showed a spontaneity and invention that came from painting on the spot where inspiration hit.

" Looking back to early days in art school call to mind a strong influence upon me of the French," said Ben in 1939. "They through Delacroix, Courbet, the Impressionists and the Moderns, injected fresh air into painting." These seminal works show the spark of that inspiration.

While in Europe, Ben collected reproductions of classic decorative painting and other artwork. He studied many of these paintings first hand at the Louvre. With the help of American Embassy in Pairs he was allowed to copy several of the works at the Louvre.

Armed with these re-creations, and a pile of black and white reproductions, he set himself up as a decorative painter when he returned to Philadelphia, continuing to paint, and win awards, for his own work at the same time.

It is astonishing that from these rather poor reproductions, Ben was able to interpolate the colors required to make these works look authentic. It is perhaps even more fascinating that he was able to create such mannered works, while at the same time painting such vivid and modern works.

All of these worked explored a unique side of Ben Solowey. Most people familiar with Solowey landscapes of Bucks County, experienced something akin to a revelation while viewing these vibrant works from Ben's European tour.

The variety of work in this show astonished even the most knowledgeable Solowey admirer. There were fine portraits, landscapes, and still lifes created in a number of styles. This exhibition showed that Ben's virtuosity, even at this early age, was remarkable.

Read reviews of this exhibition