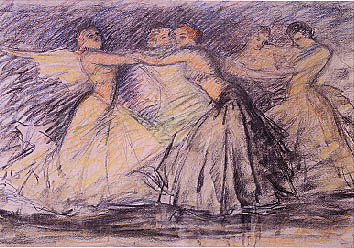 FLIGHTS OF FANCY:
Artwork from the Imagination of Ben Solowey and Henry Pitz

In a private collection of Ben’s work, there is a wonderful pencil drawing of a river front scene that is a delicate delineation of the view. It could be anywhere, at any time in history, save for one detail. In the right center of drawing, rising abruptly is an unmistakable sign of the 20th century: a stop sign. The stop sign is so incongruous with the rest of work, that the collector asked Ben why he included it. His response was that "it was there, so I drew it."

"The visible world was his hunting ground," was how one magazine article described Ben’s subject matter, and Ben was quoted as saying, "I paint what I see." Often he did just that, recording the world around him in numerous paintings, drawings and etchings. His work was based on his observations, but that does not tell his whole story.

There is another side of Ben’s work that few have known about till now. From June 8 to August 10, 1997, the Studio of Ben Solowey presented a new exhibition that raised the curtain on this previously unknown side of Ben Solowey, shown in conjunction with works by his friend, the illustrator Henry Pitz. Entitled FLIGHTS OF FANCY: Artwork from the Imagination of Ben Solowey and Henry Pitz, the exhibition explored the fertile territory where these artists’ imaginations inspired stunning artwork.

In the case of Pitz, these works were the basis for incredible body of illustration that graced the pages of over 200 books and countless magazines. From his very first work, in 1922, Pitz had an unparalleled career in which he not only was considered one of the great illustrators of the period, but the author of several definitive histories of the genre as well. Click here for more information on Henry Pitz.

Pitz’s work in this show included his beautiful pen and ink drawings for Beowolf first published in 1933, images for the King Arthur legends, shipwrecks, goddesses, and more. All were beautiful drawn, truly masterpieces of illustration, at once fresh and contemporary feeling, while simultaneously firmly grounded in the history of the art form. Storybooks and fairy tales came alive in Henry Pitz’s hands. For those who have never saw his work, or for those who had only seen the work reproduced in books, this show was nothing short of an illumination. The detailed renderings of these figures of Pitz’s fantasy were not to be believed.

Ben’s work in the exhibition drew on his intimate knowledge of the classic Greek and Roman legends, as well as fantasy characters from a number of other cultures. Pamona, Leda and the Swan, Pierrot and Pierotte, all made appearances. Studies for projects with a fantasy theme that were never brought to fruition because of Ben’s untimely death in 1978 were also included. Imagine a ceramic tile design of a beautiful mermaid that Ben created for his own use. In typical Solowey fashion he planned to paint, glaze, and fire the tiles himself. Or studies for a sculpture of a wonderfully impish Faun. For those who saw Ben as only a classicist, included in this exhibition were examples of Ben working in a non-representational style; works that sprang completely from his own mind.

FLIGHTS OF FANCY also featured a special section, "Shakespeare in the Time of Solowey," that focused on a selection of Solowey "Theater Portraits" of the Bard’s characters from the Golden Age of the American Theater. Much like today’s films, Shakespeare was the most produced playwright on Broadway in the 1930s. The stage provided Ben with a wealth of Ophelias, Romeos, Falstaffs, Malvolios, Hotspurs from which to capture with his sinuous stick of charcoal.

If you think you saw all that Ben Solowey has to offer, think again. If you didn’t know Henry Pitz, you were in for a treat. Through his work, you would have had the opportunity to meet another artist in Ben’s circle who has delighted many, yet whose original artwork has been seen by few. This will be a show you would not want to miss.